On Sept. 4, Chileans across the world anxiously checked their social media feeds and Whatsapp group chats, wondering about the future of their country. Would Chile adopt a new constitution?

This item is available in full to subscribers.

Our print publications are advertiser supported. For those wishing to access our content online, we have implemented a small charge so we may continue to provide our valued readers and community with unique, high quality local content. Thank you for supporting your local newspaper.

On Oct. 18, 2019, an increase in the metro fare sparked a nation-wide socio-political movement in Chile. Here, protesters in Santiago hit pots and pans in a common form of protest called “cacerolazo.”
Nina Joss
Posted Wednesday, November 2, 2022 9:00 am

We accept each other how we are and we love each other regardless.”
Pame Bradford
Nina Joss
njoss@coloradocommunitymedia.com

On Sept. 4, Chileans across the world anxiously checked their social media feeds and Whatsapp group chats, wondering about the future of their country. Would Chile adopt a new constitution?

The answer flashed across their phone screens that evening. In an overwhelming referendum result, about 62% of the population of Chile voted to reject what would have been one of the most progressive constitutions in the world.

In Santiago, supporters of the new constitution comforted each other in sadness while those who opposed it waved celebratory flags in the streets.

Meanwhile, Chileans in Colorado mourned and celebrated from over 5,000 miles away.

Pame Bradford, who works in Fort Collins Public Schools, was happy voters rejected the draft. An Aurora-based artist named Adolfo Romero, on the other hand, said the result felt like a deep blow to his heart.

Considering their opposing views on one of the most pivotal referendums in Chile’s democratic history, it may come as a surprise that Romero and Bradford are siblings.

Although they grew up under the same roof, the two Colorado-based Chileans have different opinions on what will cure their country’s ailments going forward.

From Chile to Colorado

When Romero was in high school and Bradford had recently finished, their family moved from Arica, a city in northern Chile, to the capital of Santiago.

Attending high school in Santiago among politically active peers was a formative experience for Romero. Although he does not identify with a particular party, he said his political beliefs are left-leaning.

Bradford, on the other hand, was less interested in politics. She said she focused on “things with discipline” growing up, such as sports and martial arts.

When she was 25 years old, Bradford moved to the U.S.

“It might be kind of cheesy, but I moved because I felt that I was going to find love here,” she said. “I actually did find it.”

After traveling for a few years, she met her husband and settled down in his home state of Colorado. In 2008, her parents moved to the U.S.

Romero followed suit in 2014 to be near his family. 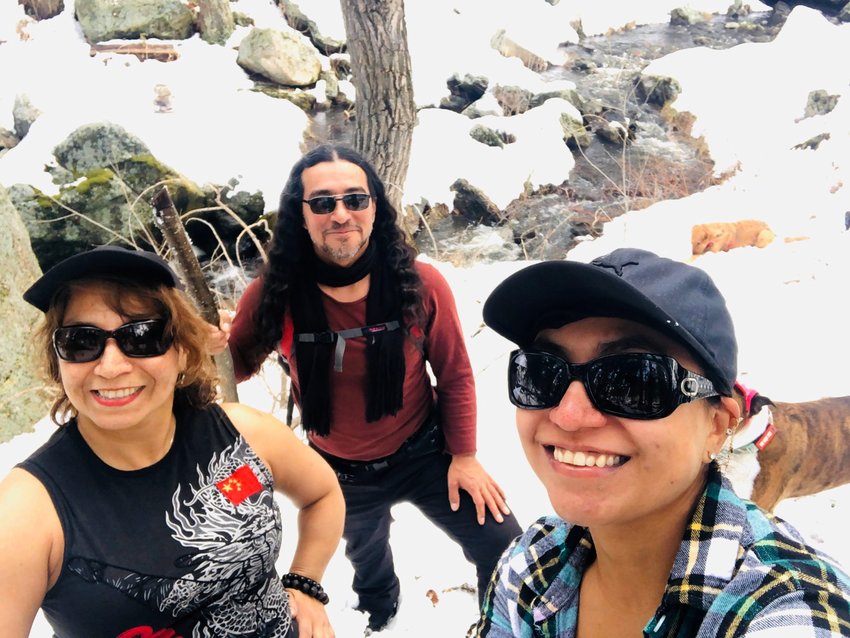 On Oct. 18, 2019, an increase in the metro fare sparked massive demonstrations in Santiago. Both Bradford and Romero watched from afar.

This was the beginning of a nationwide socio-political movement referred to as the “estallido social” or the “social explosion.” For months, protesters demanded changes in economic and social policies that had been in place since the country’s military dictatorship, which ended in 1990.

The estallido was a frightening time for some Chileans. Bradford said she was concerned as protesters burned metro stations and destroyed private property.

“I was really distraught… I mean, we are really connected to the country and when you see bad things happening, it affects you here,” she said. “I know we could have come up with better ways to do it… the reasons might be good, but not the way it was presented.”

Romero, unlike his sister, said he was hopeful when the demonstrations began. After being involved in community movements for most of his life, it felt like his country was finally awakening to its problems.

Although he wishes political change were achievable through “just talking,” Romero said it’s sometimes necessary for people to take to the streets.

But Chileans who went to the streets were met with excessive force from police, according to the Human Rights Watch. From Oct. 18 to Nov. 20, in 2019 almost 9,000 protesters and bystanders were injured and 26 people died, according to the organization.

For Romero, the police response to the protests was the most tragic part of the situation.

“It was very sad… to see how many people got injured… by the police,” he said. “I felt very powerless.” 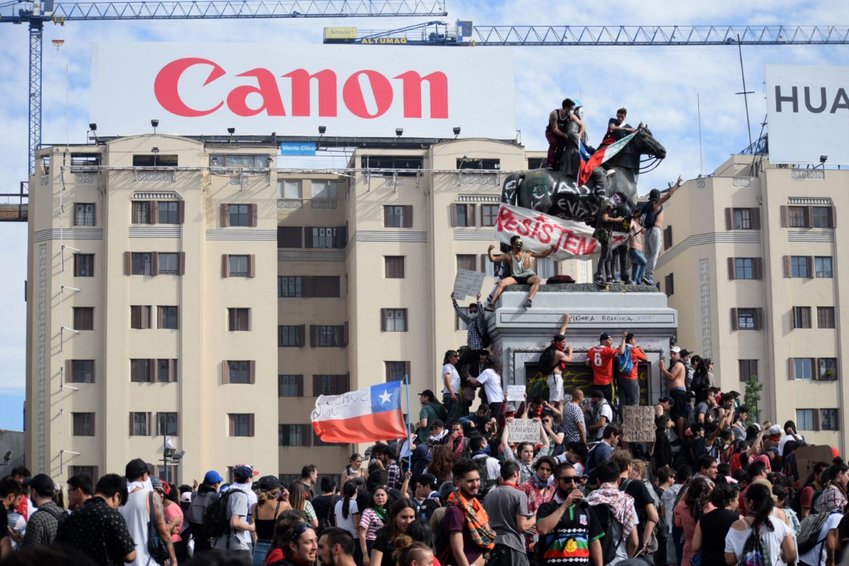 Protestors in Santiago, Chile filled the central plaza to call for change. Formerly known as Plaza Italia, the space was renamed "Plaza de la dignidad" or "Dignity Plaza" during the social movement of 2019. Photo by NINA JOSS.

The road to referendum

As the movement continued, protesters started turning their attention toward a document that could address all of these problems at once: the constitution.

“That was the core of everything. That is the core that supports the model, that holds the entire system,” Romero said. “So when (the protestors) chose that point, it to me was finally the right pathway to get a change.”

Under Pinochet, the availability and affordability of health care, social security, education and even water were largely driven by the free market. The 1980 constitution, despite modern amendments, maintains a role for private sectors for these services.

These neoliberal decisions bolstered Chile’s economy but did so at the expense of extensive human rights abuses during the dictatorship. More than 3,000 people were killed or “disappeared” under Pinochet’s regime and over 27,000 more were victims of torture, according to Chilean commission reports.

Still, some applaud the dictator for the economic growth during his reign. Others condemn his human rights abuses and point to his economic policies as the root of Chile’s devastating inequality.

About a month after the protests began, then-President Sebastián Piñera agreed to hold a nationwide referendum to vote on the possibility of rewriting the dictatorship-era constitution. On Oct. 25, 2020, 78% of voting Chileans approved the decision to rewrite a new charter.

Voters also determined that a convention of elected citizens would draft the new document. In a global first, the constitutional body was required to have gender parity. In addition, 17 seats were reserved for Indigenous individuals, according to the National Library of Congress of Chile.

In May 2021, voters elected a constitutional convention made up of 67% independent candidates, many of them part of left-leaning movements, according to Universidad de Chile professor Claudia Heiss.

The nontraditional makeup of the body gave some Chileans hope when the process began, but polls showed a decrease in voter confidence in the convention as time went on.

After one year of the convention’s work, the draft faced its fate in a referendum in which all Chileans were required to vote. The earlier votes in the constitutional process had been voluntary.

According to the Chilean Electoral Service, Chileans abroad voted to approve the draft but the overall population overwhelmingly rejected it.

Both Bradford and Romero would have had to travel to another state to vote, so neither was able to cast a ballot due to logistics. 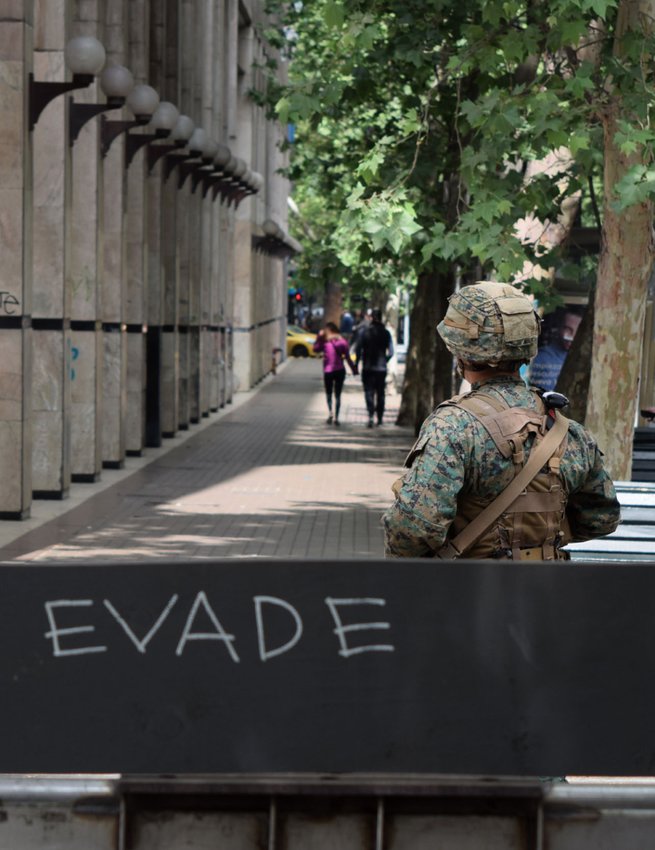 An armed soldier stands guard in front of a metro station, graffitied with the Spanish word “evade." This term signifies the first form of protest during the week of Oct. 18, when students started jumping over metro turnstiles to avoid paying the fare. Soldiers were stationed throughout the streets of Santiago later that week when President Sebastián Piñera declared a state of emergency. Photo by NINA JOSS.

“Chile is a social and democratic state of law,” started the new constitutional draft. “It is ‘plurinacional,’ intercultural, regional and ecological.”

Supporters of the document praised its progressive character while opponents stressed the far-reaching and unachievable nature of the constitution’s goals. Some opponents wanted to keep the 1980 version. Others said they desired a new constitution, just not this one.

In Bradford’s opinion, the members of the convention tried to take on too many topics.

“I do agree with some changes for the environment and things like that. But I think this proposal was covering way too many things and it became unreliable — people realized that,” she said.

But Bradford’s biggest concern about the new constitution was that it did not address what she sees as Chile’s main issues. Specifically, Bradford said she was concerned about danger and crime in Chile, which she attributed to a lack of control over immigration.

“I still have all my extended family members (in Chile) and I hear every day what they're suffering. And those real issues are not getting addressed,” she said.

She also opposed the idea of making the state “plurinacional,” which means recognizing the coexistence of multiple national groups within a country.

“We are a united country there. I don’t believe that we should start calling each other something different,” she said.

For Romero, identifying the country as such was one of the biggest strengths of the draft. He said it was important to recognize Indigenous nations.

“When we talk about ‘plurinacionalidad,’ we are talking about the recognition of their territory and their cultural autonomy, and that they are asking for the right to organize themselves in some way,” he said. “For me, that’s good. It's the minimum that can be offered after years of colonization — the minimum.”

Romero also applauded the draft’s inclusion of rights to healthcare and education.

“The right to health care exists in various countries, and it works well,” Romero said. “It’s the same with the right to education… The people ignore it because they simply haven’t lived (that) reality.”

Romero added that he thinks many people who voted against the new draft were influenced by misinformation campaigns about its contents. Bradford said she knew people who read the draft itself and still rejected it. 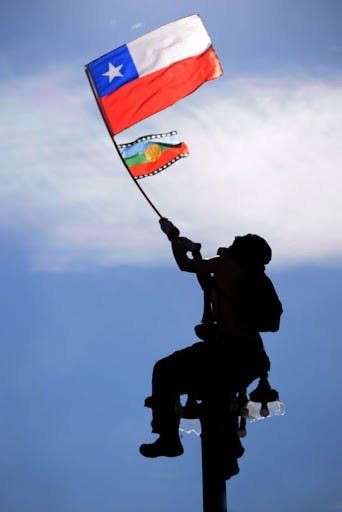 A protester on a lamp post waves the Chilean flag (top) and the Mapuche flag (bottom). The Mapuche are a group of Indigenous people in present-day Chile and Argentina. Photo by NINA JOSS.

“The process isn’t over in Chile,” he said. “It’s a battle that was lost, but the people are going to continue fighting.”

Despite their differences, Romero and Bradford say they are close. Adding their parents, younger sister and extended family into the mix, they are surrounded by a wide range of political opinions.

She compared their political differences to other differences she and her siblings have, such as the ways they like to relax and their tastes in music.

"You put priorities in life and family's the first priority. Love — love for your family," she said.

According to Romero, his family’s differences represent the diversity that should exist in a healthy society.

“If I expect that all my friends think exactly the same as me, it will be me (who is) the problem,” he said.

Even when an entire new constitution is on the line, he says differences are valuable.

“This is the base of a society, what society should be,” he said. “It’s a plus when you have a difference.”

Editor’s note: Some sections of this story have been translated from Spanish. Parts that remain in Spanish are designated with italics.

Other items that may interest you

Kulmann presents State of the City
Mayor Jan Kulmann touted the city's growth – both in population and economic development – during her State of the City address. Kulmann also offered updates on the Thornton Water …

High school seniors reflect on life lessons from athletic careers
For high school seniors a few months from graduation, athletics have helped them prepare for the ups and downs, and the responsibilities of adult life.

MCA Denver shares artists’ creative process
There’s a podcast now for almost everything — listeners can get guidance on tackling mental health challenges, learn about practically any period of history and develop strategies for a fantasy …

We have noticed you are using an ad blocking plugin in your browser.

The revenue we receive from our advertisers helps make this site possible. We request you whitelist our site.